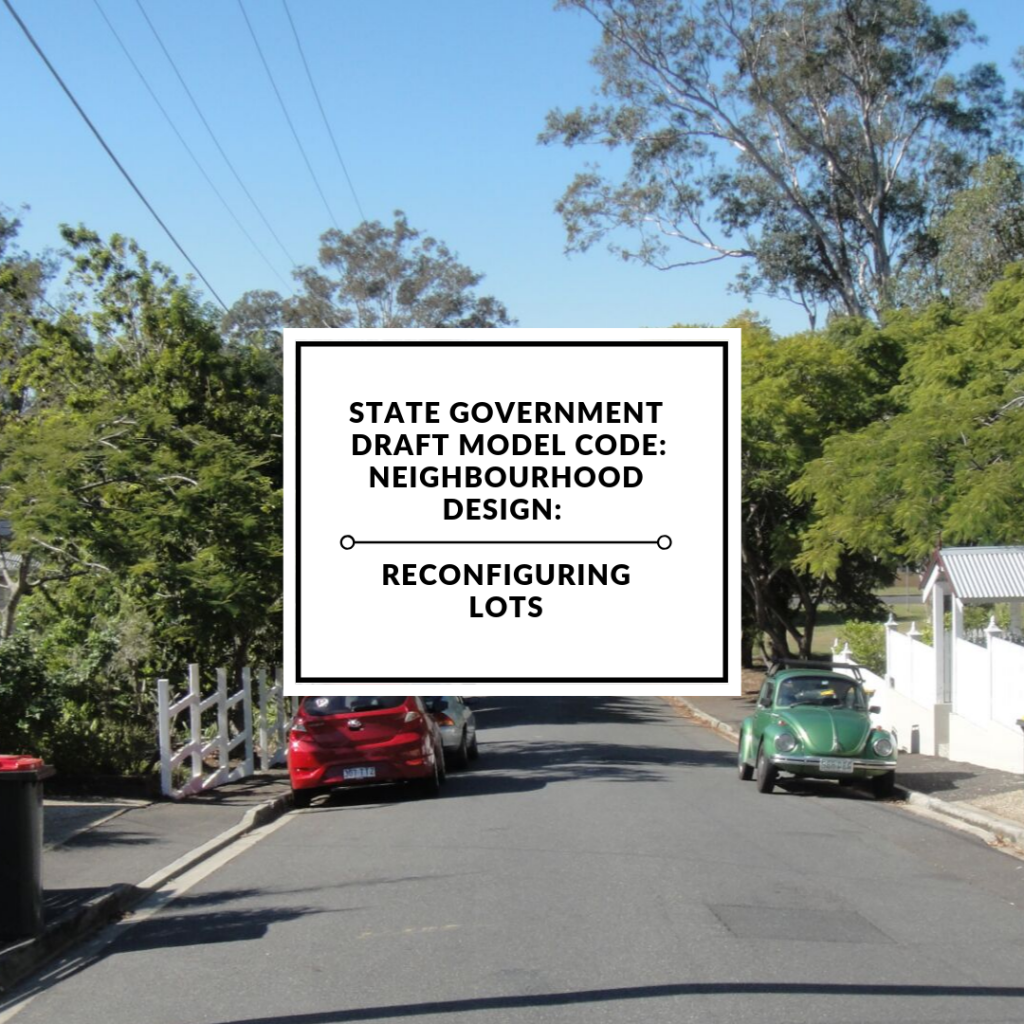 The State Government have recently released a new Draft Model Code for Neighbourhood Design to be enforced when reconfiguring lots. The Draft Plan is now open for public consultation until 1 September 2019.

The purpose of the Model Code for Neighbourhood Design – a Code for Reconfiguring a Lot is to:

The objective of the code is to promote physical activity and healthy lifestyles by promoting safe, attractive, convenient and functional street design. Some of the initiatives include:

On the surface, it would be hard to disagree with the objectives of the new code. However, upon a considered and deeper scrutiny, we realise the objectives are some of the most basic urban design principles known to experienced practicing planners and urban designers and which could be (and are) enforced without new and expensive provisions. We question the necessity of the proposed State code and suggest that enforcement upon local governments is simply condescending, as if they don’t already take into consideration these age-old planning and design principles and are incapable of assessing appropriate neighbourhood design?

Heavily vegetated neighbourhoods with accessible open space is not a new initiative – it is a common and longstanding principle which local councils, residents and experienced professionals are both aware and supportive of. The thought of decreasing lot sizes for more public open space reveals a vision of parks crammed full with little space for people to enjoy themselves. There should be a balance of private outdoor space and public space, which includes varying lot sizes and options for residents with diverse needs.

We see contradiction regarding the stigmatisation of cul-de-sacs and the view that they demote safety and active lifestyles. Cul-de-sacs are often used as an alternative development measure to the ‘grid’ pattern when site constraints do not allow the traditional grid lot arrangement to be achieved, and offer a number of direct and indirect benefits. Cul-de-sacs uphold quintessential Australian traditions, such as informal cricket or football games, that provide activation of the streetscape and remind motorists that they are moving within a shared space. They enable children to play in streets safely without the fear of cars, and often decrease traffic and vehicle speeds through neighbourhood roads. Further, they are typically favoured by residents as they encourage neighbourly interaction, sociability and a sense of community, which has been proven to reduce crime rates.

The model code promotes the creation of endless thoroughfares with higher speed movements as being the ideal outcome for neighbourhoods. It demonises cul-de-sacs when in fact they encourage physical activity, improve safety and promote a sense of community. We see this as a narrow-minded way of thinking and regressive step for the future of our neighbourhoods.

The proposed code represents a clear under-utilisation of tax payer funds on an endeavour where time and money could have been spent more effectively. This shows a lack of appreciation of opportunities and physical constraints to efficient and cost-effective design outcomes by bureaucrats disconnected with development initiatives of low speed, safe, narrower road reserves that discourage through traffic movements into quiet neighbourhoods. Perhaps resources would have been better spent on park upgrades and street vegetation planting – instead, insular principles and universal planning ideals which local governments typically employ on a circumstance specific basis will potentially be given mandatory statutory weight.

Lastly, we question how will the plan be implemented into policy? There has been no mention as to whether or not the design code will be implemented into SARA referral processes and State Development Assessment Provisions, or factored into local planning scheme policies. Or will it be delivered as a guideline? It should be made known how the code will be weighted and enforced within policy as we know this will play a critical role in its adoption and effectiveness.

We wait with keen interest to see how residents and developers react to the principles of the code and its delivery into planning policy. Will it change anything at all? Will it prove a waste of time and resources? Will it be a regressive step in neighbourhood design and minimise choice for alternatives when dealing with constrained sites?